Are programmes like The Great British Bake Off influencing the food industry?

Food programmes such as Master Chef, Bake Off and even Come Dine With Me are influencing amateur cooks, who originally only thought of cooking as a hobby, to open up businesses and compete with the best of them in what is already a saturated market, so what is the real affect of TV cookery shows on the catering industry?

From biscotti to smoked scallops, us Brits are embracing our new foodie status and we are enjoying cooking like never before, and not just in the kitchen but in newly opened independent cafes and bakeries across the UK.

The Bake Off has been the biggest influence on the baking industry, 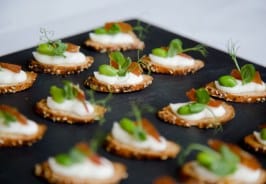 a recent Waitrose survey revealed that baking is more popular than ever, 19% of people say they bake at least once a week and 50% bake more than they did five years ago. These figures aren’t only relevant for home cooking, there has been a boom in new baking businesses – of the 4,190 in the UK, 51% opened since the Great British Bake Off was first broadcast in 2010, while Simple Business Insurance received 2,000 quote requests from cake entrepreneurs last year: a huge increase of 325% since Bake Off began.

It is not all about baking– we are inspired by chefs too.
Guest chefs who feature on the show Master Chef for little more than ten minutes are seeing bookings for their restaurants soar by as much as 400%. These TV shows attract impressionable, aspiring chefs from all over the UK with four million to 12 million viewers per episode; they give an important insight into the creative world behind cooking and teach the importance of food presentation, certain recipes seem to inspire the inner chef and viewers are either replicating the dishes they see or are going to visit the restaurant to taste it for themselves.

Have you noticed a difference in the amount of catering and baking firms competing in the market since the TV cooking boom?
With such a huge, competitive market it can be hard to find your niche. However, there seems to be no reason to worry as even though people are turning to home cooking and smaller local eateries, catering is still as popular as ever. It accounts for 26% of the food sector as a whole and is growing year on year.