Marquee wedding receptions are as popular as ever but it looks as though the option to hold a marriage or civil ceremony in a marquee is about to become a reality too. The planned changes announced as part of Monday’s budget by chancellor Philip Hammond are intended to remove much of the red tape surrounding allowable venues for marriages and civil ceremonies. 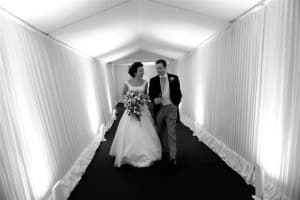 The chancellor has asked the Law Commission to investigate and reform arcane marriage venue laws – some dating back to the 1800’s, to create a ‘Simpler and fairer system’ that offers couples a greater number of choices whilst also helping reduce the cost of weddings across England and Wales.

The move would mean that outdoor locations including marquees would be able to host wedding and civil ceremonies, bringing English and Welsh laws into line with those that already exist in Scotland.

Under the new rules couples will be able to use a marquee to create a uniquely styled and personalised location for their ceremony. Those looking for an alternative to a church or register office ceremony will no longer be beholden to the ‘Standard’ packages offered by many authorised venues such as hotels.

Current laws dictate that a venue must specify the building in which the ceremony will take place and that food and drink cannot be served in that area – not only during the ceremony but in the hour leading up to it too – tricky for those hoping to hold a Champagne and canapé reception as guests arrive. 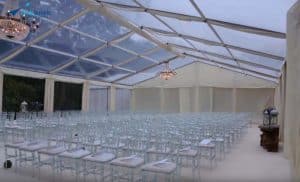 Bear in mind that it’s not only the ceremony room that’s set in stone, many venues have a series of standard spaces in which the wedding photographs are taken. For many venues weddings can be a rather conveyor belt like affair with couples opting for package A, B or C and photographs taken in the same spots week in, week out. Under the new proposals the option to hold the wedding ceremony in a bespoke built marquee would guarantee something unique and tailored to the personality of each couple instead.

Marquees can easily be adapted to create separate areas for ceremony and reception. A curtain can be used to create a stunning post ceremony ‘reveal’ to the reception space, walkways can be created to take guests from one area to another or a beautiful pagoda marquee could be used for an outdoor ceremony.

Take a look at the video below showing a marquee set up for a wedding ceremony followed by a wedding breakfast. Of course the couple involved here (Clients of Inside Outside Marquee hire) were operating under restrictions imposed by the present system and had already conducted their ‘real’ wedding ceremony at a register office in the morning – the associated costs and logistical problems of which should all become a thing of the past once the Chancellors new rules come into play.