Just as the world of fashion takes its inspiration from the haute couture collections of Paris and we gradually see the influence of top designers watered down to high street brands, so RHS Chelsea Flower Show represents the very best of gardening design. Guaranteed to attract florists, horticulturalists, landscape gardeners and the public alike, RHS Chelsea Flower Show sets the trends for the coming season – and those amazing show gardens that exist for such a short time will continue to have an influence on floristry for many months to come.

Visiting RHS Chelsea Flower Show is a visual feast for the eyes. But it can 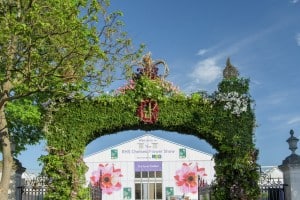 be difficult to see the wood for the trees (if you’ll pardon the pun!) when trying to spot what plant and flower varieties are the next big thing. So we asked Chrissie Milton, Events Manager at RHS Gardens Wisley, to give us a few pointers as to emerging trends.

2016 marks, of course, the Queen’s 90th birthday and Royal florist Shane Connolly created a fabulous floral arch at the Bull Ring entrance gate. The arch was made using British flowers, foliage and plants – with beautiful pale pink roses creating a delicate colour palette against lush green foliage, the arch represents the very best of British floristry. The English Country Garden continues to be ever popular, with favourites such as irises, aliums, foxgloves, lavender, salvia and achillea out in force at the show. Peonies were also in evidence, as were geums. 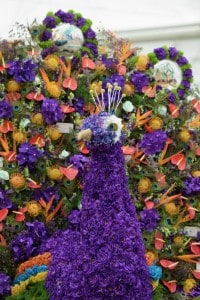 In terms of colour, pastels are in, with blue, lilac and pink used in many of the gardens. But shades of green as a key component, as opposed to being a ‘filler’ were also given far more importance, as was very clear in Shane Connolly’s arch. Other designers opted for a riot of colour in their planting schemes, including Diarmuid Gavin’s Harrods British Eccentrics garden and Ann-Marie Powell’s RHS Greening Grey Britain garden, so florists will continue to use bright and bold colours in the coming seasons, which will please anyone planning an event with a strong colour theme.

Orange was definitely a dominant colour throughout the show, both in terms of flower choice and additional design elements. A copper band was a key feature that flowed through the Winton Beauty of Mathematics Garden – beautifully echoed in the planting scheme, these softer orange tones really worked and will definitely show their influence when it comes to Autumn and winter events. Similarly, the Chelsea Barracks garden included several bronze sculptures, which again picked up on the orange colour palette. And the designer also used roses in a fresh way, contradicting the usual belief that rose gardens have to be formal – look forward to how that will translate into floral displays and decoration! And whilst on the subject of both roses and orange, David Austen Roses’ copper ‘giant peach’ sculpture won a Gold medal and saw the launch of ‘Roald Dahl’, a new variety which has delicate peach coloured blooms and so named to commemorate the centenary of the author’s birth. 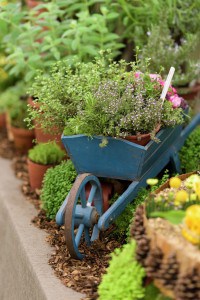 When it comes to greenery, fern has become a favourite choice of designers and creates a nice sense of movement, whilst others clipped box, bay and yew to create sculptured forms, something that may well translate to smaller, table-top displays as an alternative to the traditional floral arrangement.

One clear message from many of the show gardens was a move to fluidity and naturalism. Again, this is something that will translate well into floral displays. Meadow planting and creating colour and interest in urban spaces means a move towards less formality and a more relaxed approach to composition. Combined with colour, this gives florists a fantastic opportunity to be creative.

And finally, royal baby Princess Charlotte had a flower named in her honour, a stunning pink and green chrysanthemum that will surely be making an appearance in floral displays this summer.