The Rollercoaster band recently performed at the wedding of Emily from highly respected caterers Two Many Cooks. Inside Outside provided the Marquee for this spectacular Winter Wedding, pulling out all the stops, including organising a bespoke bar, designed by our friends at Barrel and Cask, to match the bars in the Two Many Cooks shops! 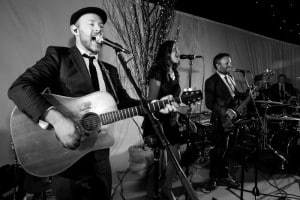 ‘Emily called me around July time to say “I’m getting married in November – when are you available?” Not uncommon for the Rollercoaster Band – we get clients asking if we are available over a few specific dates, but plenty that simply ask ‘When ARE you available?’ The point is, with Rollercoaster, when a booking is gone, we don’t split the band to take another date… we are simply committed to the confirmed gig. And with around 60 weddings a year, it can get quite busy in peak periods!

Emily booked a six piece band and confirmed within days of the inquiry then the planing and preparation began. The band was to arrive at 2pm on the night of the event, meaning we could  setup and clear out by 4pm which was when the wedding party would be leaving the church just 100 yards along from the marquee! The first dance was to be Lauren Platt’s version of Happy, which we decided would be best played from the recording as it is quite a heavily sequence piece (owing to it being a ‘mashup’ with Massive Attack’s Teardrop). Emily had seen the band before at previous weddings and events, so chose to let us have full control over the setlist, and any DJing in between. To be honest, this is usually the best thing to do, though clients always have the option to add or remove whatever songs they choose form the selected list.

A week before the gig, we spoke to Emily and checked all was good and double checked timings and made sure that all other important details and logistics were in place.

We’d be performing on a wide but shallow stage  – meaning we would spread across the width of the dance floor, it was raised just enough to allow the guests to see the band and for us to see the guests – important for communicating with the crowd. Up-lighters  were positioned across the back of the stage – a nice addition that creates depth and contrast behind the band.

The sound-check took us right up to 4pm. We made sure that all the levels were right – making sure the vocals, and all the instruments could be heard – going through sections of different songs, with our different singers (as we had 4 different vocalists taking the lead throughout the show). We also set our lights, making sure they lit the band, and dance floor alike. At any gig, the sound will tend to change slightly, with a room full of people, from that of an empty one. We make sure one of the band members heads out during an early point in the set, just to check it’s all sounding good, and if needed, make any adjustments. On the really big shows, we would take a separate sound engineer, but for most weddings this isn’t needed.

Speeches ALWAYS overrun. Ok, occasionally they don’t, but as a rule, they do… we expect this, so are ready to hit the stage as soon as we’re needed. Every wedding / event is different, Emily’s wedding speeches ended at around 9pm and we moved out to the dance floor to tune up and check the gear.

After getting the OK from all the musicians, I informed the MC that we were ready to roll. He firstly invited the guests to witness the cutting of the cake (an incredible multi layered cake as it was), and then proceeded to welcome bride and groom to the dance floor for the first dance. On the closing notes of which, I announced “…ladies and gentlemen – Emily and Chris!”… and the band started the first set of live music! 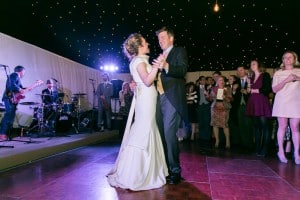 We had a short 10 minute break at around 10.50pm, during which the drummer Chris DJ’d from his laptop, keeping the guests happy on the dance floor. The second set pushed on ending around midnight and after 2 encores, we played the final song – Daydream Believer, a great one for all the wedding party – young and old! 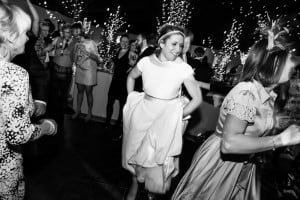 So as the guests drift away, satisfied and thoroughly entertained, to various taxis, lifts, or hotels, we started the pack up and load out.  By 1am, we were all in our cars heading home…

Congratulations to Emily and Chris, it was a pleasure being a part of your big day!

Schools are reopening and pupils can return to sch

Fantastic to see our marquee we built for @fegouk

Brentford FC Gym Marquee Honered to have this gym

We are proud to be the supplier of this marquee to

We always try and go the extra mile... with the co

Getting engaged? Congratulations from all at Insid

'The times, they are a changin!' At Inside Outsid