Summer is almost over – why not plan an Autumn event!

So it’s the tail-end of summer and the weather has been a bit of a mixed bag. That said, here at Inside Outside we’ve helped create some summer parties that have been fantastic no matter whether the sun has shone bright or not. Of course, this summer has also been notable for other things happening, not least of which was Brexit, something that affected the mood (one way or another) of the entire nation.

Has lack of sun and too much EU debate left you feeling low? Does Christmas feel too far away?

September, October and November are often ignored as being suitable for parties, but why not buck the trend or even start a new one? A party could be just the lift that family, friends, colleagues or business associates need as the days grow shorter and cooler. Autumn is also a great time to discover some fantastic flavours and wonderful seasonal ingredients. We spoke to Gareth Palmer at Vanilla Bean  to find out what they’ll be serving in the coming months.

Gareth told us: “Barbecuing is pretty much over and done with for the year, and we’re now working with different cuts of meat such as rib of beef or braising cuts like feather blade. September and October mark the beginning of Game season, and we’re looking forward to producing menus that feature pheasant, duck and goose. Cornish Sea Bass is a favourite fish during the autumn months – they’re at their prime after a summer of feasting in the clear Cornish waters. And oysters are always at their best in months with an R. When it comes to meat and fish we’re rather spoilt for choice at this time of year!”

Shopping for fruit and vegetables in supermarkets generally means that you can buy whatever you fancy all year round, but those in the food business know that seasonal produce always tastes better. Not surprisingly, Vanilla Bean adheres to that ethos and their chefs are currently working on recipes that will feature wild mushrooms, cauliflower, pumpkin and squash, blackberries and apples using locally sourced products. With plenty of Surrey woodlands on the doorstep, the team even goes out foraging for wild mushrooms – you can’t get much more local and organic than that!

Put it all together and what do you get?
We were lucky enough to get a sneak preview of several dishes that Vanilla Bean will be serving this Autumn, starting off with a fantastic blackberry and apple mojito that looks incredible. The colours literally conjure up images of English hedgerows in the Autumn. 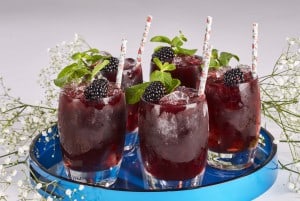 The Cornish sea bass mentioned earlier is cooked tandoori-style, a wonderful thick fillet served with red onion bahji, spiced pumpkin risotto and curry leaves. Again, the dish looks autumnal and the warming flavours are perfect for an event held on a cold afternoon or evening. 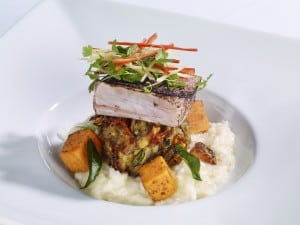 And duck is transformed into a visual and taste sensation – seared duck breast and confit leg, served with kumquat and butternut purée, truffle potatoes and steamed tenderstem broccoli. We love the mix of familiar and more unusual ingredients, it’s guaranteed to provide a foodie ‘wow’ factor! 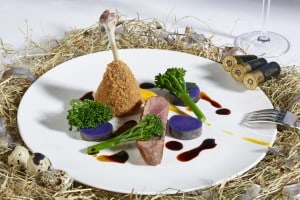 Feeling tempted to plan a party during the Autumn? Call us on 01372 459485 or email sales@inside-outside.co.uk to find out more about our marquees.